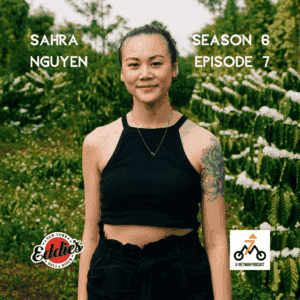 It is a lesser-known fact that Vietnam is the number two producer of coffee in the world. Vietnam predominantly produces robusta beans, rather than arabica beans, which are grown predominantly in Latin America. The sweeter and more expensive arabica beans are the most popular type of coffee in the world, compared to the more bitter robusta. The latter are used predominantly in instant coffee and as filler due to their lower price, and thus are seen as inferio by many.

For anyone who has been to Vietnam and tried the caffeine-laden robusta based coffee, they will testify to its own special qualities that make it an excellent drink when made and drunk correctly.

Guest on A Vietnam Podcast, episode 7, Brooklyn-based Sahra Nguyen has set out to change that perception and is on a mission to transform the coffee industry through diversity, inclusion, and transparency.

She is the Founder & CEO of Nguyen Coffee Supply, America’s first specialty Vietnamese coffee importer & roaster, and has recently appeared on the Drew Barrymore TV show, several other podcasts and Zoom panels. Since high school she has been involved in activism, notably recently in support of the Asian and Pacific Islander Communities, especially in light of the recent violence towards this community in America.

With an 11 hour time difference between Saigon and New York the interview took place on Zoom on Tuesday morning at 7.30am, Monday evening for Sahra. The earliest recording of A Vietnam Podcast yet!

With coffee in hand, Niall clicked with Sahra right away over their love for coffee and Vietnam and thankfully didn’t encounter any technical difficulties despite communicating 13,500km (8,400 miles) apart. Niall was even confident and comfortable enough with Sahra that he immediately challenged her on her pronunciation of her own family name on a Ted Talk! (‘Ng-win’ rather than ‘Nu-gen’.)

Sahra’s parents left Vietnam in 1978 shortly after the war ended, but didn’t meet until they settled in the U.S., despite having a similar timeline and story to get there. As for many at that time in Vietnam, life was difficult for their parents’ families, with little work and a shortage of food, having to “mix potatoes and rice just to try and extend the meals”.

They made the difficult decision faced by many and decided to flee Vietnam. After several attempts, they were finally able to get on a boat and after being at sea for several months, they successfully left Vietnam. Coincidentally, both made it to a refugee camp in Hong Kong where they stayed for around 2 years. They finally met, fell in love and, once they were safe and settled, started their family in Boston, Massachusetts.

Before talking about coffee, Sahra shares how she ended up being a guest on the new Drew Barrymore Show. Twice!

This was a massive moment for her and her family, being fans of Drew Barrymore since E.T. all the way through to 50 First Dates. Thankfully, Drew Barrymore lived up to her public sweetheart image – with Sahra fangirling hard when she met her, even for the second time. Before anything else, Drew checked in with Sahra to ask if she was OK in the light of the recent attacks on the Asian community and if she was comfortable talking about this subject on the show.

Before her second appearance on the show, Sahra’s mum sent a serving of bún thịt nướng for Drew and her team to try. Not only did they love it, but Drew talked about it on the show – much to Sahra’s mum’s excitement! Drew was extremely excited to see phin coffee in action and try Nguyen Coffee Supply. To Niall, after being in Vietnam for so long, this seemed like a daily mundane experience!

As Niall finishes his first cup of coffee for the day for this early interview, the caffeine kicks in just in time to discuss one of his favourite things in life… coffee!

Vietnam is not even the only country to add sweetened condensed milk to their coffee, and this marketing “is pure false advertising”, as Sahra says. Then the activist in Sahra comes alive. More importantly to her, it “renders the actual producers of the coffee invisible. Just call it Ethiopian coffee with condensed milk. If people want to profit off the cultural cache of a Vietnamese iced coffee concept, the biggest problem to me is the producers and creators of this product, Vietnamese producers, farmers and people, are not benefitting at all from this transaction.”

This reluctance to use robusta in specialty coffee was from that perception that the Vietnamese robusta bean was inferior and cheap. “These are all social constructs,” says Sahra. As she explains the industry more, her enthusiasm and passion can be clearly seen and heard.

This sense of injustice and lack of transparency in the specialty coffee industry drove Sahra to create Nguyen Coffee Supply. She wants to change the narrative around Vietnamese coffee being cheap and instant to specialty, single-origin, sustainable and organic coffee.

And the demand for Vietnamese coffee is exploding. Nguyen Coffee Supply has received 500 calls from businesses since 2019 to sell their coffee or wanting Vietnamese beans to roast themselves. According to their own research, Vietnamese coffee cafes in the United States are growing 1100% year on year. And Vietnam’s own King Coffee chain just opened its first store in Anaheim, California. “There is a wave of Vietnamese coffee culture happening in the States now,” Sahra excitedly adds.

After all this talk of coffee, Niall needs another one to wake up so early in the morning, finishing his first. So they move onto the same questions asked of every guest at the end of Season 6 A Vietnam Podcast;

It is exciting to see this part of Vietnamese culture make its way stateside and the misconceptions being challenged and changed by Sahra and her team. It is also incredible to see her energy and passion. Just follow Nguyen Coffee Supply on Instagram to see what they are creating. It is so infectious it almost makes you want to import roasted Vietnamese beans into Vietnam! According to Sahra we’re not the only ones. If you are in New York make sure you visit them in Brooklyn. And if you come to Vietnam make sure to bring us some!