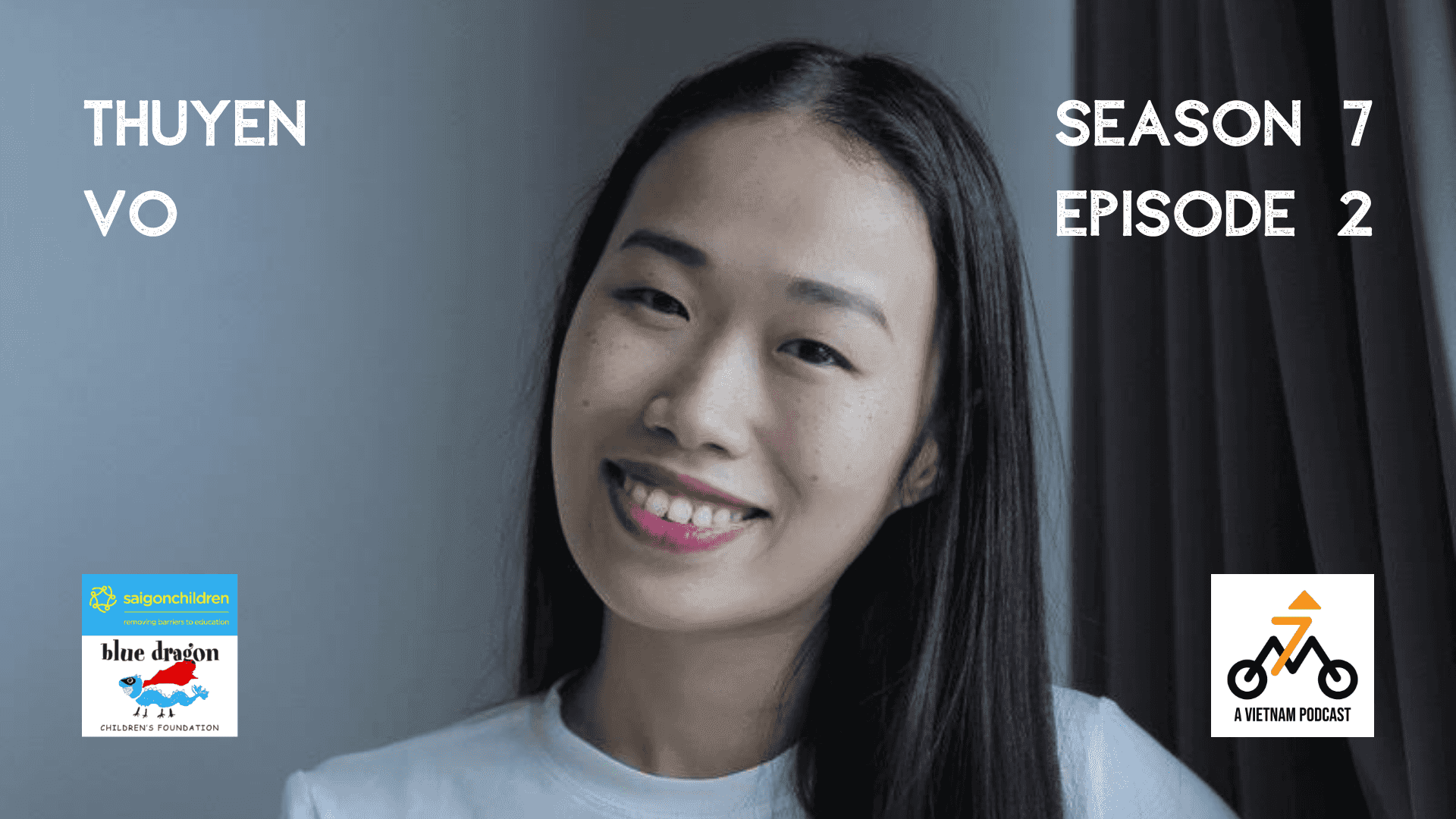 Thuyen Vo is the founder of Easy English Vietnam and Easy Vietnamese – 2 language centers in Saigon. She is also known as the seasonal host at Best Ever Food Review Show, with a background in Digital Marketing.

Thuyen has a passion for education and is combining her skills in English and Marketing to make this happen. She predominantly wants to help Viet Kieus living in Vietnam who may want to update their Vietnamese. As discussed on the show before, people who have lived in countries like the U.S. since the 70s, have an older, outdated Vietnamese dialect. This also provides a niche for her business.

This leads to a discussion of languages such as Gaelic in Scotland not translating new vocabulary words such as internet or computer, and if Vietnamese do that. A funny example is a word Niall just heard for the first time, simp. Thuyen laughed at the notion of the word, but admitted it would be difficult to translate it into Vietnamese.

According to Urban Dictionary the top definition of a simp is someone who does way too much for a person they like.
Brian shu the simp: I bought her a car and a whole ass house and we not even dating!
Nathan the pimp: U a simp.

There are other examples of slang changing the meaning of words in modern terms, for example, the modern use of the word thirsty, opposed to just wanting a drink. If you’re reading this and don’t know what that means then look it up!

“I've seen a big difference between me and Gen Z. They are so smart and active and are crazy with technology. I think that the internet definitely makes it a flat word, I've seen it in my students.”

Thuyen is from Quang Ngai, two or three hours from Da Nang, close to Ly Son Island, famous for it’s black garlic. With her mum a literature teacher and father a journalist this ultimately influenced her to reluctantly get into the education sector.

The desire to learn English in Vietnam is large, and growing. There are ambitious targets to increase the number of people that speak English. But from the data that Thuyen reads, Vietnam is still a far way off mimicking countries like the Phillipines where the majority speak English.

Furthermore, the education gap between rich and poor, rural and city, is stark. “I see that very clearly now in Vietnam. If you go to rural areas, it’s sad, education is like a luxury. We need to make education accessible to everybody. And that is something that I believe in and I’m trying to do that.”

This is exacerbated by the notion in Saigon by the younger generation that not only is speaking English “cool” but it also means you are smarter, which Thuyen doesn’t believe.

Thuyen also sees that in part due to the lack of Vietnam’s cultural diversity, while very friendly, they can be judgemental to other races. Especially the older generation who aren’t as globally connected. More out of curiosity than anything else, “If you come back to my hometown, people will be like, wow. So white, so, so hairy” Thuyen jokes.

You may also know Thuyen from hosting on the Best Ever Food Review Show, one of the most popular Food Review channels on YouTube with over seven million Subscribers and 1.4 billion views!! Part of its success is it’s affable host Sonny, and the high production values.

Thuyen was initially asked through a mutual friend of Sonny’s to appear on one episode with Vietnamese girls tasting American style food. Sonny was so impressed with her that he asked her to join him in further episodes and then gave her her own segment called $10 Street Food Challenge!

She was a hit, one comment “Thuyen the most amazing co-host. You couldn’t have picked a better person to be guest host” was echoed several times.

A previous guest from Season 2, Calvin Bui, became a regular co-host with Sonny before starting his own successful channel called FKN Deliciousness. Many of the comments called for Sonny and Thuyen to co-host episodes together.

Liz Peterson, the show manager, was due to appear on the final episode of the previous season, but the team have had to relocate to the U.S. to continue reviewing food. Something that’s not been possible in Saigon since June and maybe not again until 2022. We hope to see the BEFRS team back in Vietnam when it’s safe to do so!

There was also talks to have Sonny as a guest if and when his schedule allowed. In a weird twist of fate, Niall met Sonny through their dogs one day, moments after he’d messaged Liz about Sonny appearing on the show. We hope he can be on when he is back in Vietnam.

Here are the shortened answers to the questions asked of every guest at the end of the show.