Only 150k for the hottest comedy entertainment in town, with a craft beer, wine or soft drink included.

Niall Mackay (SCO)
As the founder of Seven Million Bikes Niall Mackay has been entertaining people since 2019 through the shows A Vietnam Podcast and Did That Really Happen?, hosting comedy shows and performing across Vietnam.

Inspired by his comedic heroes, Billy Connolly, Bill Hicks and Ricky Gervais he’ll make you laugh at being a Scotsman abroad, life in Vietnam and anything else in between.

“Niall wins his audiences over with a charming presence and funny jokes and songs! He has a hilarious point of view as an expat and world traveler!” – JK Hobson

Jack Nguyen is your typical broke college freshman born and raised in Saigon, but most people prefer to call him pseudo-American. He started doing stand up comedy at the age of 17 and has an experimental approach to comedy. Jack loves clean PG jokes that’s fun for the whole family, provided that your family is dysfunctional. Oh, and don’t ask for his “real” name.

An American who split time in Colorado and NYC growing up. New to stand up scene but has over 150 TV commercials to his credit plus several film and television appearances. Most notably he was a featured regular on MTV’S cartoon, DARIA. You can stream his latest film ROOK on YouTube and Amazon.

JK Hobson got his start in entertainment playing in the Metal, Punk, and Hardcore scene in the Lower East Side of New York City in the 90’s back when NYC was still dangerous! He moved to Los Angeles in 2000 with his touring band Crisis and landed a record deal, eventually leaving the music biz in 2012. He first hit the stage as a standup comedian in 2013 at Marty’s Open Mic on Hollywood’s iconic Sunset Boulevard on a dare!  He performed standup again in 2016 and soon afterwards moved to Vietnam on a Fulbright Scholarship. He began performing regularly in Saigon in 2017, and has been doing so ever since! His caustic brand of humor which is full of takes on race, dating, and a large range of social issues made him a finalist in the Vietnam Comedy Competition, and has taken him all over Vietnam as well as Thailand, Cambodia. He even graced the stage in his hometown of New York City in 2019! 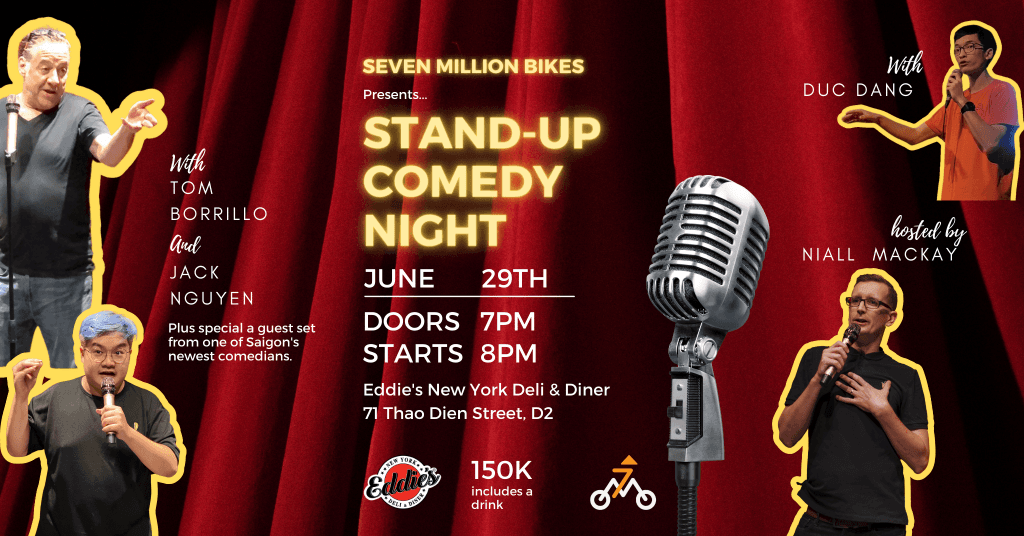 A FUN NIGHT OUT GUARANTEED!