Nickie Tran, a fish-sauce American, worked for a major chip manufacturer in the U.S. before becoming an “accidental chef”.

After “failing hard” at opening a Saigon restaurant in 2010 a drunken night changed his life.

This resulted in being featured in a magazine shortly after he opened the restaurant, which led to more print media attention. including an airline magazine, in just a short time.

He was then approached about appearing on a Netflix show when he didn’t even know what Netflix was!

We had so much to talk about in this episode and could have talked about so much more. So much so in fact I split this episode into two parts! 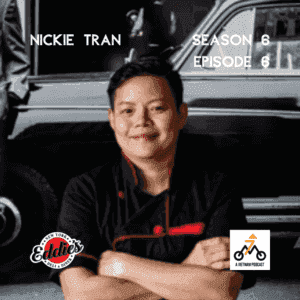