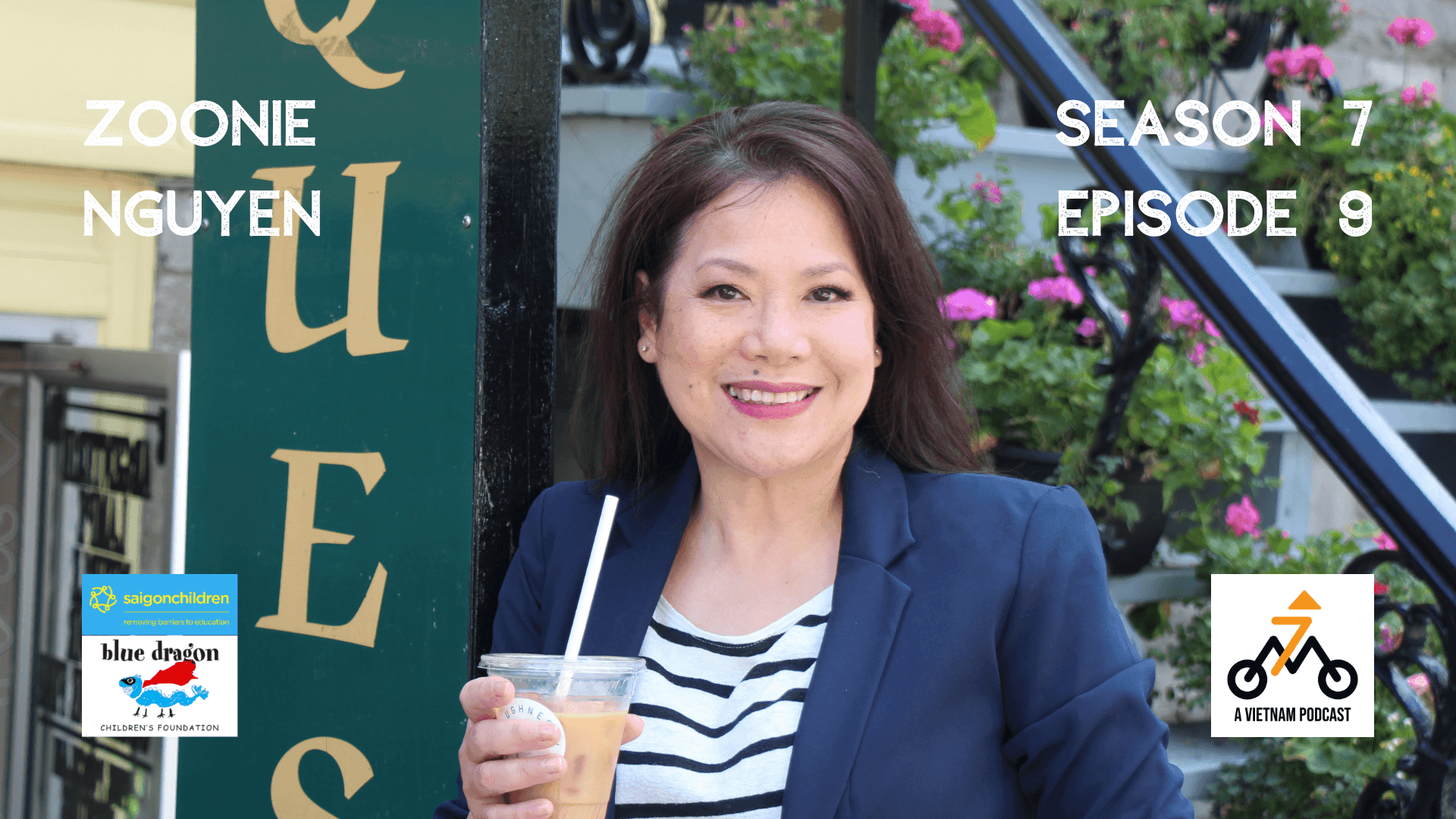 This episode’s guest has an incredible story to share with A Vietnam Podcast.

Zoonie Nguyen grew up on Nguyễn Thông street in Sài gòn and left on the last day possible – on April 30th 1975. At only 8 years old, her family escaped and went through an exodus from hell on the last boat with 4,000 people.

This was a traumatic journey, but by a ‘miracle’ they made it to a refugee camp and after many months the family started a new chapter of their life in Canada. In 1995 Zoonie decided to go back to visit Sài gòn, a trip that completely transformed and turned her life around.

She is now known as a public speaker, coach & mentor for women entrepreneurs launching and growing their business. She is currently making a documentary called ‘How She Dares’.

When Niall started A Vietnam Podcast he knew very little about the plight of the Vietnamese Boat People. Talking to so many interesting guests over seven seasons, he has started to learn more and more about this important part of the Vietnamese diaspora’s history. You can tell it is hard for someone living in the modern and thriving Vietnam of today, to comprehend the horrors that people not much older than him had to live through.

Talking to incredible people like Sahra Nguyen, Lâm Vissay, Tracey Nguyen Mang and now Zoonie Nguyen It is incredible to see how the hardship and sacrifices that their parents made resulted in such a positive influence on the world. Their stories will be just a few of many around the world.

Zoonie’s story of escape sounds like a Hollywood movie and it’s unbelievable to realise that this was no movie and her and her family actually lived through this. With little warning and no idea what was next, they had scrambled to board a boat and left behind their life in Vietnam. Miraculously the whole family, including 8 children, survived the ordeal.

“I feel so lucky that I was eight because I have two older brothers and two older sisters, and I think it affected them a lot more than me and I have two younger brothers. So when you’re eight years old, even on that boat, when we laugh during the chaos, for me, it was like, I’m going to school today.”

4,000 people on a boat made for 500. Three days under the sun, with no food or water. They had no idea if they would survive as they headed for international waters. Some people jumped off and committed suicide, one man shot himself in the head next to Zoonie, covering her in brain.

“I had blood on me and I passed out. I remember when I woke up I had nothing on me. And I told my mom, I said, there’s a man he shot himself. And my mom kept saying, no, it was a nightmare. She had cleaned me up to protect me.”

Incredibly, a Danish boat, “Clara Maersk”, answered their SOS call and picked them up but during the scramble to board peoplewere being trampled, including children. Thank’s to Zoonie’s quick thinking mother everyone was paired up two by two and able to stay strong against the crowd. From there the Clara Maersk took them to the closest island, Hong Kong.

But when they arrived they were denied entry and told to go back to Vietnam. For anyone who has read about the experience of Vietnamese boat people this was a common occurrence from many neighbouring countries, if a boat was even able to make it that far.

Thanks to a direct intervention from Queen Elizabeth who was visiting Hong Kong at the time, a refugee camp was opened and they could get off the boat.

“We had cookies. We had milk, to me it felt like Christmas. And we knew that we were safe now. we just wanted to be on land. We didn’t want to be on the boat anymore. And so my next couple of months were in the refugee camp.”

As an 8 year old she remembers making new friends and playing with toys donated from locals. They were even small enough to put their hands through the fence to accept candies from strangers passing by.

It is incredible throughout Zoonie’s story to hear the bravery and determination of her parents. Both were respected professionals in their fields, but left with only the clothes on their back. No degree certificates, no paperwork, and very little English.

“Australia and the U.S. actually accepted us as refugees but my parents wanted to wait for Canada! They had been networking at the camp and they heard that Canada was a good country and we can speak French there. They understood French a little bit. And so they waited for Canada to accept us. if Canada didn’t take us, then we’d be stuck in that refugee camp!”

Thankfully Canada did accept them and after 2 months in the camp in Hong Kong they arrived in Montreal on June 17th.

Similar to other guests on the show, her family didn’t talk much about this traumatic time as they tried to move on and forge a new life in Canada.

While you can take the mum out of Vietnam you can’t take the Vietnam out of the mum.

“Vietnamese parents are tiger parents. My mum was a tiger mum, she just wanted her kids to have a good future, good school, high grades, and the whole shebang.”

“Australia and the U.S. actually accepted us as refugees but my parents wanted to wait for Canada! They had been networking at the camp and they heard that Canada was a good country and we can speak French there. They understood French a little bit. And so they waited for Canada to accept us. if Canada didn't take us, then we'd be stuck in that refugee camp!”

Zoonie grew up very poor, eating peanut butter for breakfast, lunch and dinner. After being fed nothing but brown rice at the refugee camp still to this day she can’t eat either of these.

But despite all this, Zoonie worked hard at school and learned how to speak like a French Quebecer while still speaking Vietnamese. The whole family graduated from McGill University. She went on to get a degree in engineering and started a successful career designing TV and Radio studios for the Canadian Broadcasting Corporation.

She was being routinely promoted in her job and saw herself climbing the corporate ladder to become the VP of Engineering one day.

Then a trip to Saigon in 1995 changed all of that.

“My attachment to my roots is very strong. I was the first one to make peace with my past. When I decided to go back, it scared my family. My parents begged me not to go. But I went, I’m very stubborn. And I went through quite an emotional rollercoaster” says Zoonie.

She convinced her husband on the idea and placated her parents by telling them she would visit their family in the north.

On arrival at Noi Bai airport they were abruptly bundled into an old Russian car and kidnapped out to the countryside!

After praying they would make it out alive they finally realised that it was her dad’s family who had picked them up and brought them to their village after the dad had called them.

This was the start of Zoonie’s transformation.

“They were asking me 5 million questions, we had to go to everybody’s house in the villages and have tea, and they had no bathrooms so that was a huge challenge!

But it was so emotional. It was my first time back and living that kind of experience, I was crying at the same time because they were telling us about what happened after 1975 and how poor they are.

We were supposed to be there for five weeks and we only stayed for three. All I did was cry or eat the whole time so we had to leave. “

So after just three weeks they cut their trip short and went to Bangkok.

When they returned to Canada just the sight of so many options of cereal and cookies brought home to Zoonie how difficult life was for her people back in Vietnam that had been left behind. Her ambitions had now changed and she resigned from her job soon after in 1997.

She had hoped her husband could get a job in Vietnam but the closest they could get was Hong Kong. So they left their friends and family behind and moved to be closer to Vietnam.

Then an interesting twist of fate, or destiny, happened. Zoonie saw an advertisement for a Project Coordinator at a refugee camp in Hong Kong. After nervously calling and hanging up several times she talked to the organisation and was offered the position.

She accepted it on one condition – she wasn’t to be paid for it, “I could have been one of these people. So this is where I think I had a bit of closure and I decided to pour all my efforts as a project manager into helping them.”

Zoonie concludes this chapter of her story, “So while my husband was working I was taking the kids out, giving them food, helping them, creating educational programs with the volunteers, taking mothers to hospital to visit their kids. That really fulfilled something that was missing. And it allowed me to have closure with my past. And so I didn’t move to Vietnam but doing that kind of work for the Vietnamese refugees in Hong Kong, it was enough.”

This has now led to her becoming an entrepreneur, public speaker, mentor and coach with the goal of empowering women. And also produce her own documentary about women in Vietnam.

Zoonie’s experience is a testament to the strength and endurance of the Vietnamese Boat People exodus. She is thankful every day to her mother who was the definition of a powerful woman, and both of her parents for their brave actions. Both Niall and Zoonie agree that Vietnam has a plethora of powerful women doing what they need to do for their families. As Vietnam begins to reopen and embrace a new normal, we can’t forget the sacrifices of so many who make this possible in the past and present.