This episode talks about topics that might make our audience uncomfortable. Please consider your own journey and safety. 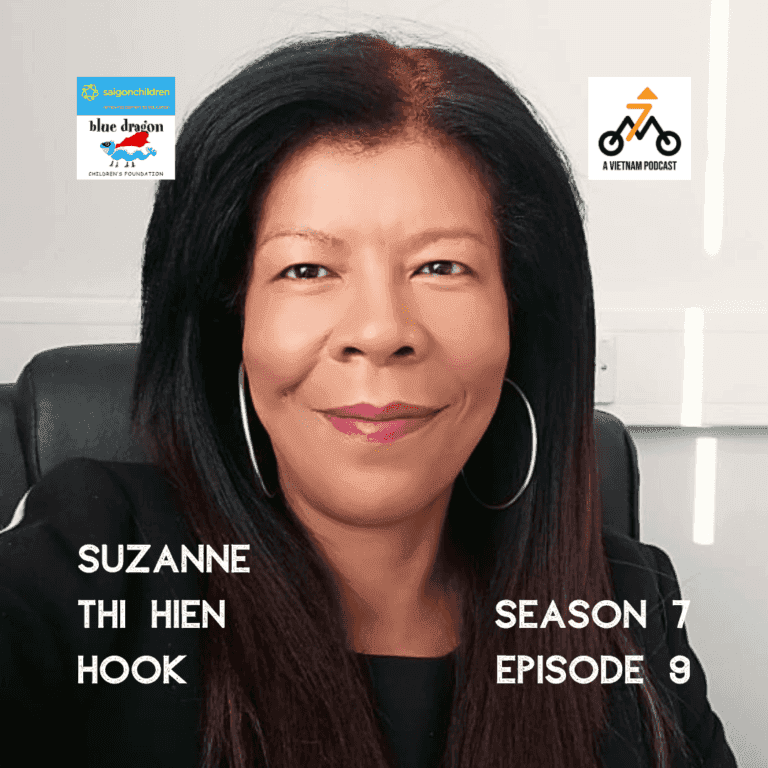 A Vietnam Podcast hosts a wide variety of guests from all over the world of all different backgrounds. Hosted by Niall Mackay, audiences never know if the episode will be funny or emotional, but they are always enlightening. In this episode, Niall knew the story being shared was an emotional one, but was still caught off guard by his reaction.

“This is the first time in over 60 interviews I’ve cried during an interview – and I’ve been close a couple of times before.” shares Niall.

During the Vietnam War Suzanne Thi Hien Hook was a baby found on the street and placed in an orphanage. She’s Amerasian; with a Vietnamese mother and an African-American soldier father. She was adopted into a white English family and moved to the UK when she was just three years old. Unfortunately this wasn’t the happy childhood expected. Despite an abusive upbringing she became a trained chef, gained a business degree and started a successful beauty business.

She returned to Vietnam for the first time in 2006 to connect with her roots,  including meeting children in orphanages with no hope in life, that had a profound effect on her. When she returned to the UK, she realised money didn’t buy happiness, and sold all of her possessions, including a £500,000 home and sports car to fund the Allambie orphanage.

After a two week holiday to Vietnam in 2006 Suzanne fell in love with her country of birth. She returned in 2007 to teach English and also worked in two orphanages.

Suzanne explains to Niall how this resulted in opening Allambie Orphanage.

“A lot of people ask me, was it something that I’d always wanted to do? And the answer truthfully is no. But I realized that there were so many children still being abandoned. The first time I walked into an orphanage, it was like somebody had smacked me in the face because it was a sudden reality that, oh my God, this was me all those years ago.”

Suzanne met Mai (name changed for privacy), a 16 year old girl at an orphanage who was being treated as a slave to care for the other children. She wanted to go to school, to college and have a career in tourism. But Mai felt so hopeless she wanted to take her own life. She heartbreakingly asked Suzanne if she could take her away to live with her.

“I suddenly realized that I wanted to give her some hope. So I decided there, and then to open up my own orphanage, and then it was a case of, how do I go about it?”

After researching how to open an orphanage Suzanne decided to sell her house, divorce her husband, sell her car and 300 pairs of shoes to save Mai. She called her and said, “I’m coming back for you. I’ll get you away from the orphanage and get you into school.”

She set herself a deadline of 6 months to do it and with the support of her recent ex-husband, friends and community – that’s exactly what she did.

They got Mai out of the orphanage, moved her into her own room, and supported her through school. They are still close to this day. Mai speaks fluent English and realised her dream by working in a top hotel in Saigon.

From there Suzanne started Allambie Orphanage.

“I wanted Allambie to be a home. For me being a Vietnamese orphan myself and being adopted and the fact that my adoption wasn’t great, with any adopted kid, any foster kid, any street kid, the most important thing is a sense of being wanted. I wanted to create a safe home environment for these kids and a home where they knew they were safe, they knew they were loved. That was very important to me.”

With Suzanne’s permission, the conversation moves to her upbringing. She was found underneath a bush as a baby by a policeman shortly after she was born in 1969. She was taken to the nearest orphanage. Suzanne still doesn’t know her real birthday or who her birth parents are.

She does know that she has a black soldier father and Vietnamese mother and has come to terms with the brutal realisation that she we conceived one of three ways; love, sex work or possibly rape.

She was later adopted by a British family who wanted to adopt a Vietnamese child through a religious organisation. She arrived in the UK in 1972 at the age of three.

Unfortunately, it was not the fairytale adoption you see in movies.

Suzanne explains, “growing up, my parents were very religious and I would say fanatical to the point where religion was everything.”

Despite their piousness in public, the reality was very different.

“My mum in public would call me Suzanne. At home, I was called devil child. Every time I was naughty, every time I upset her, I was told, you are the devil’s child. She screamed in my face ‘your mother didn’t want you, the Vietnamese nurses didn’t want you, you’re mixed race, you’re ugly, nobody wanted you’.

She told me they saved me, that I should thank them and be grateful. And that was literally my life. A lot of the time my mum would hit me and would often not feed me. And so I left home at 18. It wasn’t until years later that I realized that it was actually child abuse that I went through.”

Suzanne shares more details about her treatment at the hands of her parents, which she still doesn’t understand.

Despite not receiving a hug from her mum until she was 21, in a testament to Suzanne’s inner strength, when her mum was diagnosed with cancer she was the only one who was there to care for her. She nursed her throughout and was by her side when she died.

“I just thought, if my mum knew that the devil’s child was the only person here holding her and the so-called Christian people in my family were not here. I don’t know what her reaction would have been, would she still be calling me the devil’s child? I watched her pass away and I held her while she died.”

This is what drove Suzanne even more to let the kids in her orphanage know they were loved.

“I always made sure I told them they were beautiful, they were handsome, they were clever, even when they failed their exams, I was like, okay, I’m still proud of you. You tried your best and I still love you and say, next time let’s just try and aim for one point. And that’s something that’s very important because what I did with my Allambie kids was literally everything that I had wanted from my adoptive parents.”

After her mum passed, Suzanne decided to come back to Vietnam. Even though this was her birth country, she had no memories or associations. Growing up, she had been made to feel ashamed for being biracial and Vietnamese. Suzanne boldly wanted to step away from her traumatic upbringing and experience Vietnam for herself.

Arriving in Vietnam Suzanne hoped she would find people like herself, and find that sense of belonging she craved. Unfortunately, this was not the case.

“​​I saw these rows and rows of Vietnamese people waiting at the airport and no one was black like me and I felt a huge disappointment because it was suddenly a shock of reality that still no one looks like me and those two weeks were an emotional journey.”

But despite this Suzanne approached her country of birth with fresh eyes and was intoxicated by the bikes, the sights, the sounds, the smells. She fell in love with Vietnam, and her identity. The stigma was broken.

“That year I went on an emotional roller coaster of feelings of discovery of myself. And at the end of that, I actually came to terms with my past and I was actually really proud to turn around and say, do you know what my name is? Suzanne Thi Hien Hook and I’m half black American, this is who I am.

Listen to the podcast and you can hear the strength of conviction and power when she says this; “Suzanne Thi Hien Hook and I’m half black American, this is who I am.”

Suzanne is now proud to call herself Vietnamese and acknowledge that her father was a black, American soldier, “I’m lots of little things and that’s what makes me unique because I am not like anybody else.”

Suzanne did try to find out her birth parents through DNA testing and investigation but it came to naught. She also wasn’t prepared for the emotional rollercoaster it would be, trying to track down her parents so she has tabled the idea for now but may return to it in the future. “It’s like trying to do a jigsaw puzzle without the picture on the box” she explains.

Niall had one lingering question to ask Suzanne, “Despite the bad, was she grateful for the life and opportunities she’s had?”

“​​Even though my childhood was crap, I still was given a home. I still had a roof over my head. I still had a chance of an education. And years later I took that I turned it around. For that, I am grateful for my Vietnamese mother leaving me because if she hadn’t, I don’t know where I would be.

From this answer it seems Suzanne is more forgiving of her birth mother who had to make a tough decision and extremely thankful to the nurses that helped her. She was not as forthcoming in her forgiveness of her adopted parents and we can understand why.

War is horrible. And has many consequences. While we count the casualties, the lives affected reach far beyond that. Leaving children abandoned and orphaned has to be one of the most difficult and long reaching effects, touching people for years into the future and beyond.

Suzanne’s story is an incredible one in so many different ways, and we were so grateful she shared it. After interviewing over 60 guests since 2019, this was without doubt the most emotional but also inspiring episodes from A Vietnam Podcast. It was amazing to learn what a strong, and wonderfully accepting person she is and has become on a very difficult journey.