This episode talks about topics that might make our audience uncomfortable. Please consider your own journey and safety.

During the Vietnam War Suzanne Thi Hien Hook was a baby found on the street and placed in an orphanage. She’s Amerasian; with a Vietnamese mother and an African-American soldier father. She was adopted into a white English family and moved to the UK when she was just three years old. Unfortunately this wasn’t the happy childhood expected. Despite an abusive upbringing she became a trained chef, gained a business degree and started a successful beauty business.

She returned to Vietnam for the first time in 2006 to connect with her roots, including meeting children in orphanages with no hope in life, that had a profound effect on her. When she returned to the UK, she realised money didn’t buy happiness, and sold all of her possessions, including a £500,000 home and sports car to fund the Allambie orphanage. 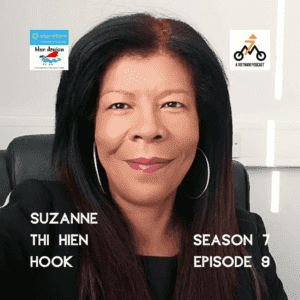 Read The Blog For This Episode
Read The Transcript